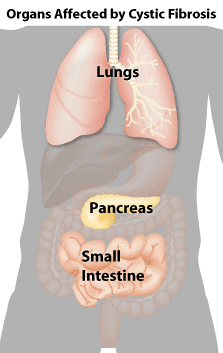 Cystic fibrosis (also known as CF or mucoviscidosis) is a common hereditary disease which affects the entire body, causing progressive disability and often early death. The name cystic fibrosis refers to the characteristic scarring (fibrosis) and cyst formation within the pancreas, first recognized in the 1930s. Difficulty breathing is the most serious symptom and results from frequent lung infections that are treated, though not cured, by antibiotics and other medications. A multitude of other symptoms, including sinus infections, poor growth, diarrhea, and infertility result from the effects of CF on other parts of the body.

CF is caused by a mutation in a gene called the cystic fibrosis transmembrane conductance regulator (CFTR). This gene is required to regulate the components of sweat, digestive juices, and mucus. Although most people without CF have two working copies of the CFTR gene, only one is needed to prevent cystic fibrosis. CF develops when neither gene works normally. Therefore, CF is considered an autosomal recessive disease.

One in 25 people of European descent carry one gene for CF. Approximately 30,000 Americans have CF, making it one of the most common life-shortening inherited diseases. Individuals with cystic fibrosis can be diagnosed prior to birth by genetic testing or in early childhood by a sweat test. There is no cure for CF.